Just to let you know that I now have a new website specifically to focus on my pattern design and professional knitting life. For now, I will keep this going as a personal blog and then review once the dust has settled.

Information on my patterns, design work, teaching and classes will now be found at:

Please do pop over there to take a look and let me know what you think. While you are there, why not sign up for my newsletter to make sure you never miss an update?

It's Friday, the sun is shining (well it might do later, if it feels like it) and I have a new FO: 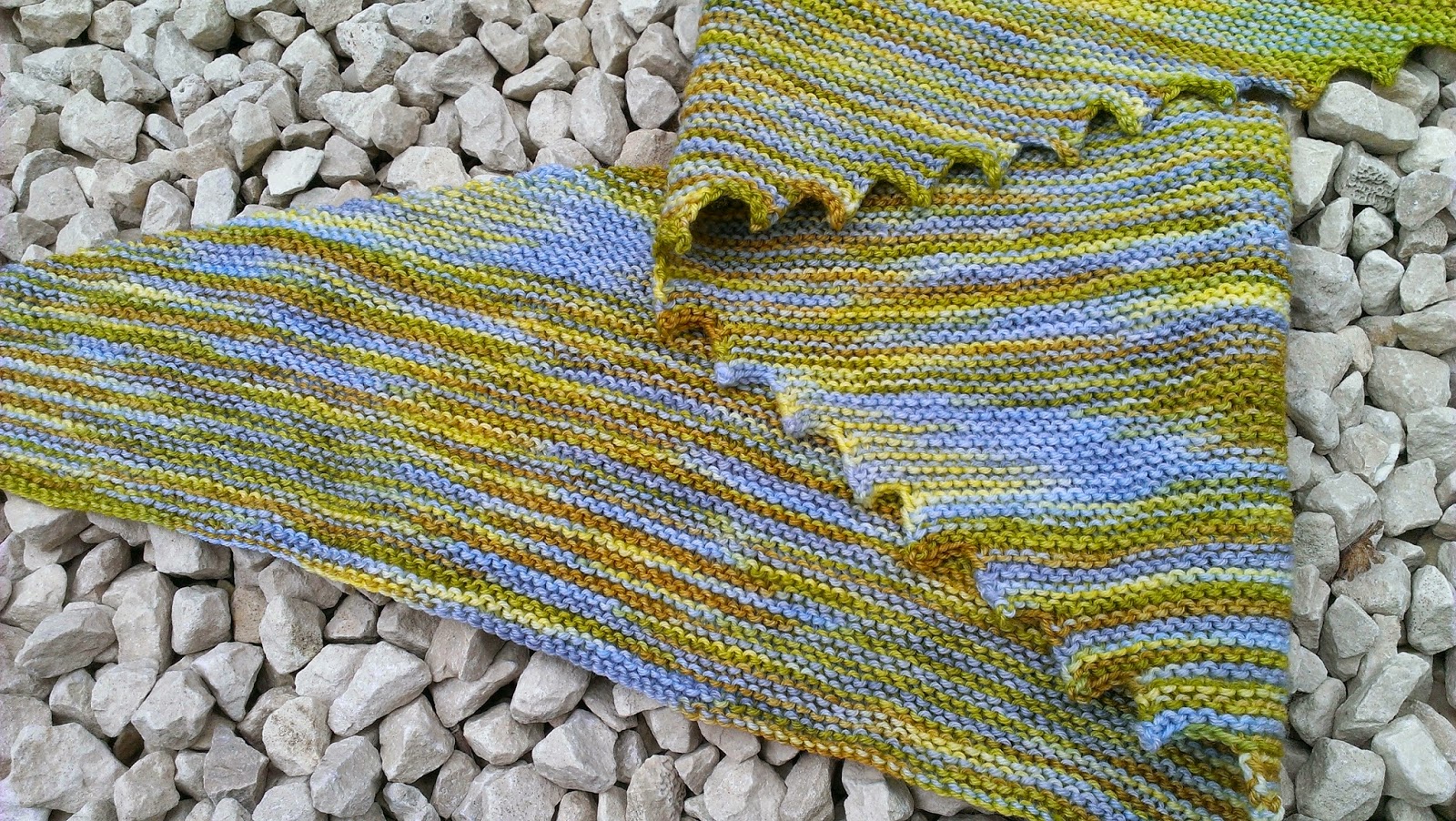 My new Hitchhiker shawl in some fabulous yarn from The Love of Yarn. I got my sticky little paws on this yarn courtesy of the Trial Club for The Golden Skein and have been wondering how best to use it in a project.

The colours are a vibrant mixture of yellows, golds, greens, blues and greys. Now yellow isn't really my thing and I can count on one hand the number of projects I have made which contain yellow - a check of my 280-odd Ravelry projects confirms this anti-yellow bias - but I Love, Love, Love this shawl.

The colours work really well together and although I did get some pooling (although the changing stitch count helped to minimise it) I think it looks fabulous in the finished item and is really very wearable. It isn't quite as long as my other Hitchhiker (I think I got 34 'teeth') but the ends are long enough to wrap comfortably and I'm very happy with it. 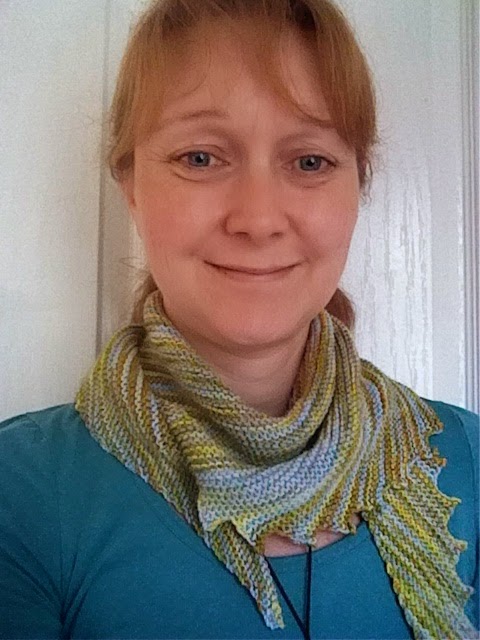 Note to self: next time put makeup on before taking FO photo.

The Spring KAL is continuing over on the group , with some fabulous finished items on show. Do pop over and check out what others are doing and feel the Sping Love.

My run of FOs has come to an end, and instead I have lots of WIPs - some old and some new.

The Hitchhiker continues apace and I hope to be finished with that fairly soon.

I have also started a sock yarn blanket - yes I know I said I would never do one but it just goes to show that you should never say never. During a spring-clean of my sock yarn stash I unearthed over 1.2kg of sock yarn (and that is just the good stuff). I found a lot of Regia and basic sock yarn leftovers which went to the charity shop.

So, what is one to do with 1.2kg of beautiful (mostly hand-dyed) sock yarn but turn it into a thing of beauty - a monster sock yarn blanket no less.

I am following this pattern, but with modifications so that the first square is turned on it's side - see here-  to become a diamond. This means that the blanket is then shaped with straight edges and avoids the need to knit lots of little triangles to fill in the gaps.

I had a very productive day recently and made a flying start; 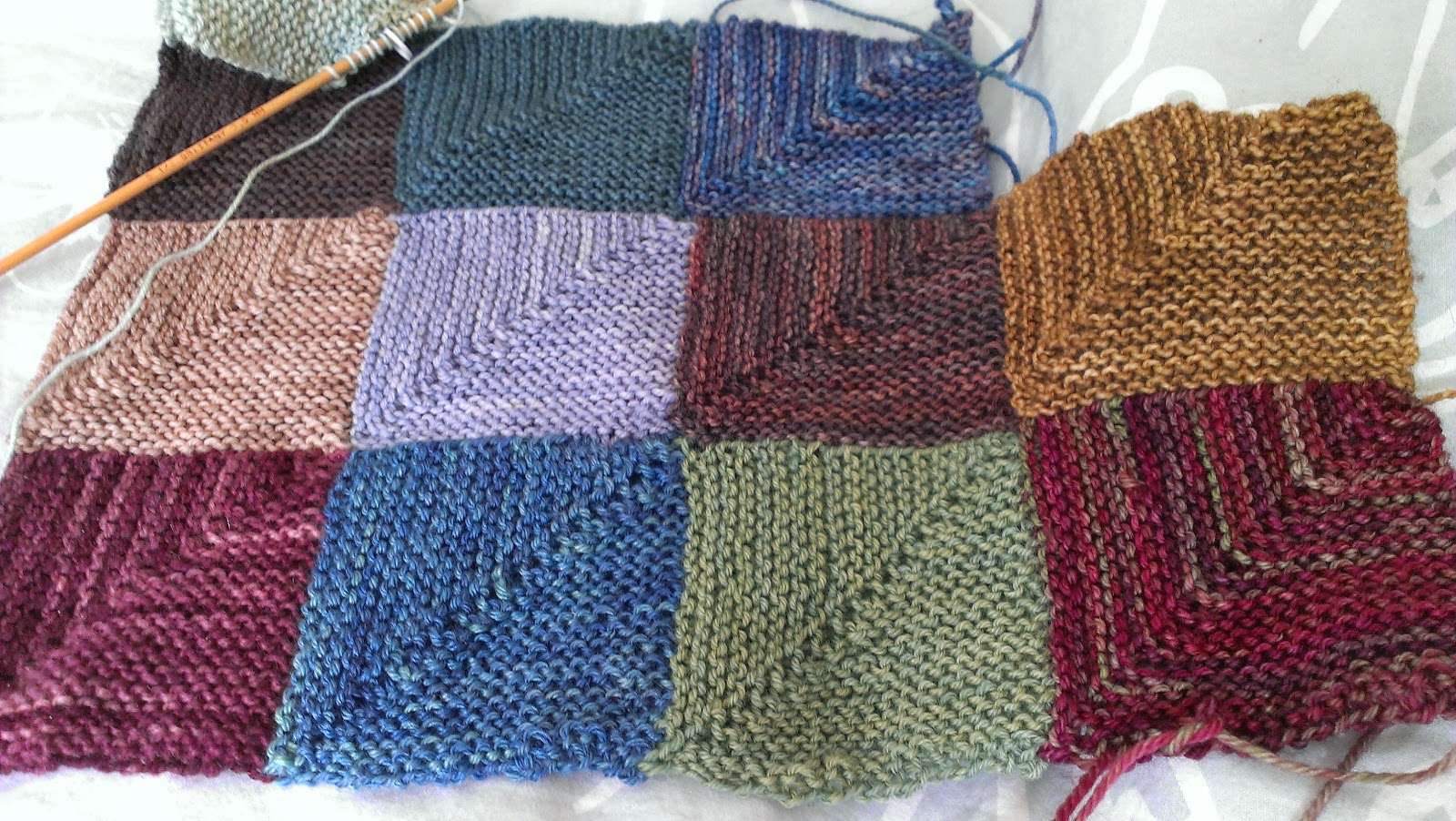 That pesky thing called work has slowed me down a little since, but I am aiming to do a square a day, with the odd power blitz on it every so often.

I won't bore you with it's slow incremental progress but I think it will be fun to do a monthly update of progress - if nothing else it will keep the project in the front of my knitting mind and stop it sinking to the murky depths of my WIP pile.

I read a helpful tip for knitting one of these blankets somewhere which said that you should aim to get a sizeable amount done in the first few weeks when enthusiasm levels are at their highest. Once that's done, it's a lot harder to ignore a blanket with 50+ squares compared to one with just 5.

Over on my Ravelry group I am hosting a Spring KAL. A fun relaxed KAL with very few rules and lots of happy spring-like knitting.
It doesn't need to be one of my patterns, it can be socks, shawls, mitts, even a full scale sweater if you have the stamina.

Just cast on anytime from now onwards and finish before May 30th. Post your cast on post and project pictures over in the group thread to qualify for one of the three prizes and tag your project with #springiscoming.

You can also join in on Instagram with the hashtag #springKAL

As for my spring project. I have chosen a Hitchhiker in some beautiful yarn from the Golden Skein..
A delicious blend of wool and bamboo, nothing says spring to me more than these vibrant yellows and greens. 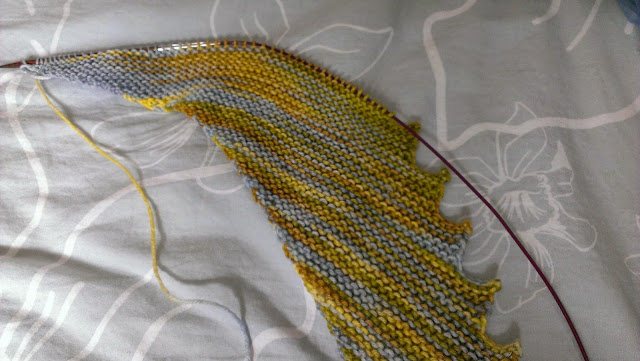 Not a knitted FO this week but a sewn one.

Trust me, those aren't words that I thought I would be typing anytime soon. I am a huge fan of the Great British Sewing Bee but I have always regarding sewing as very much a spectator sport. Memories of enforced sewing lessons at school, having to french seam a blouse and pressing pleats was enough to give me the shivers.

But a chance encounter on Twitter from Jacqui Harding aka Curvyjax pointed the way to this: a tutorial for sewing a skirt in 30 minutes.

I had to admit that I was intruiged and couldn't help popping in to my local yarn and haberdashery shop to browse fabric. 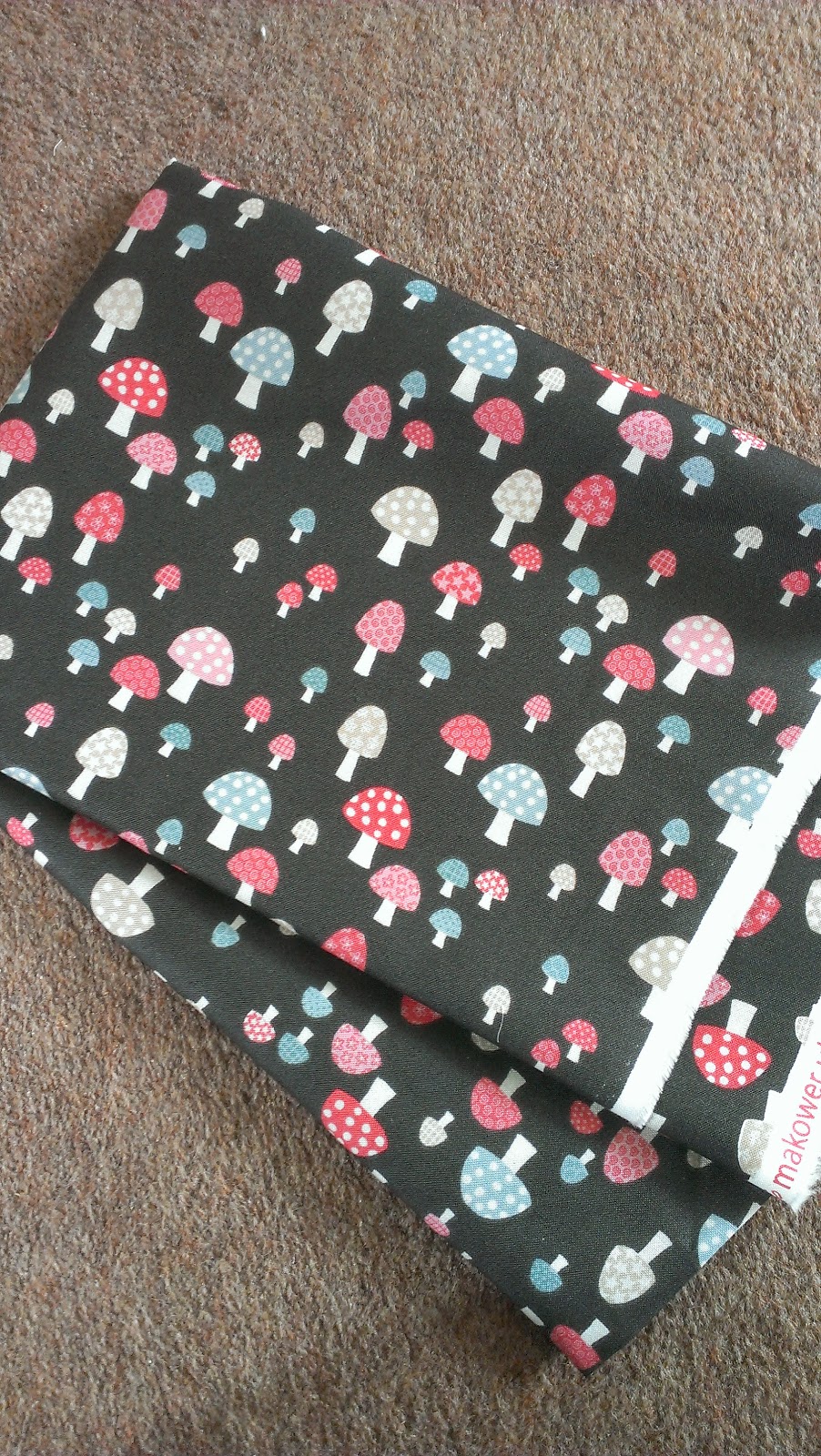 So I came home, dusted off the sewing machine and made a skirt. 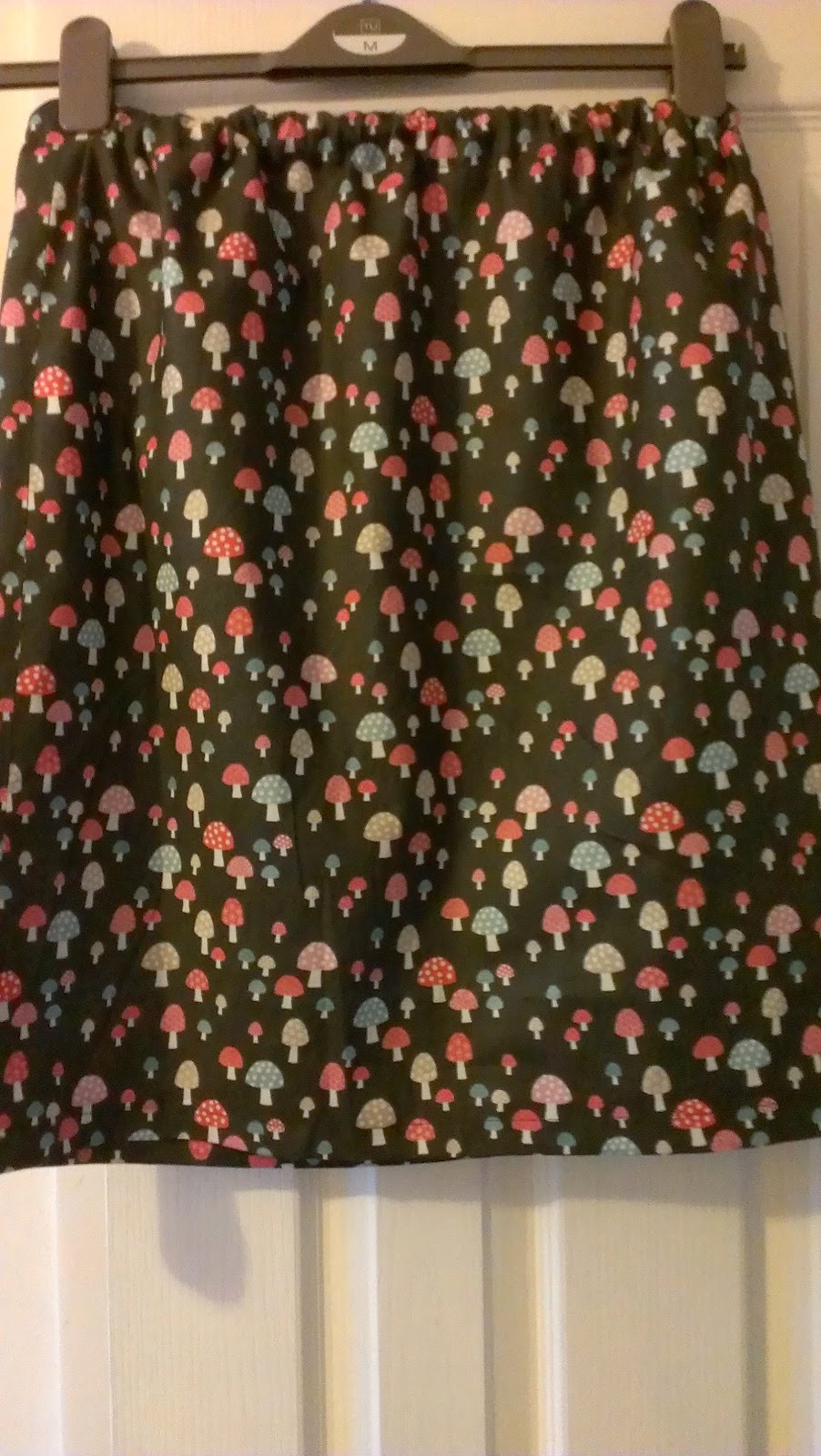 It is far from perfect and the waistband goes a little 'off-piste' shall we say. But it's fun and I'm wearing it today and feeling fab.

Now that I have dug the ironing board out of the pantry I may even indulge in some more sewing - who knows?

This post is by way of naming a shaming a work-in-progress which has been lingering for far too long.

It is loosely based on the Mitered Crosses blanket by the talented Mason-Dixon Knitting ladies and has been a pleasure to work on. The yarn is fabulous - Shilasdair Luxury dk yarn which is a blend of british lambswool, cashmere, baby camel and angora. It has just the right amount of fuzziness, delicious hand-dyed tonal variation and is feels wonderful.

Indeed, it was recently enthused about by Juju Vail from Loop London and the ladies from Pom Pom magazine in their new podcast or Pomcast as they charmingly call it. 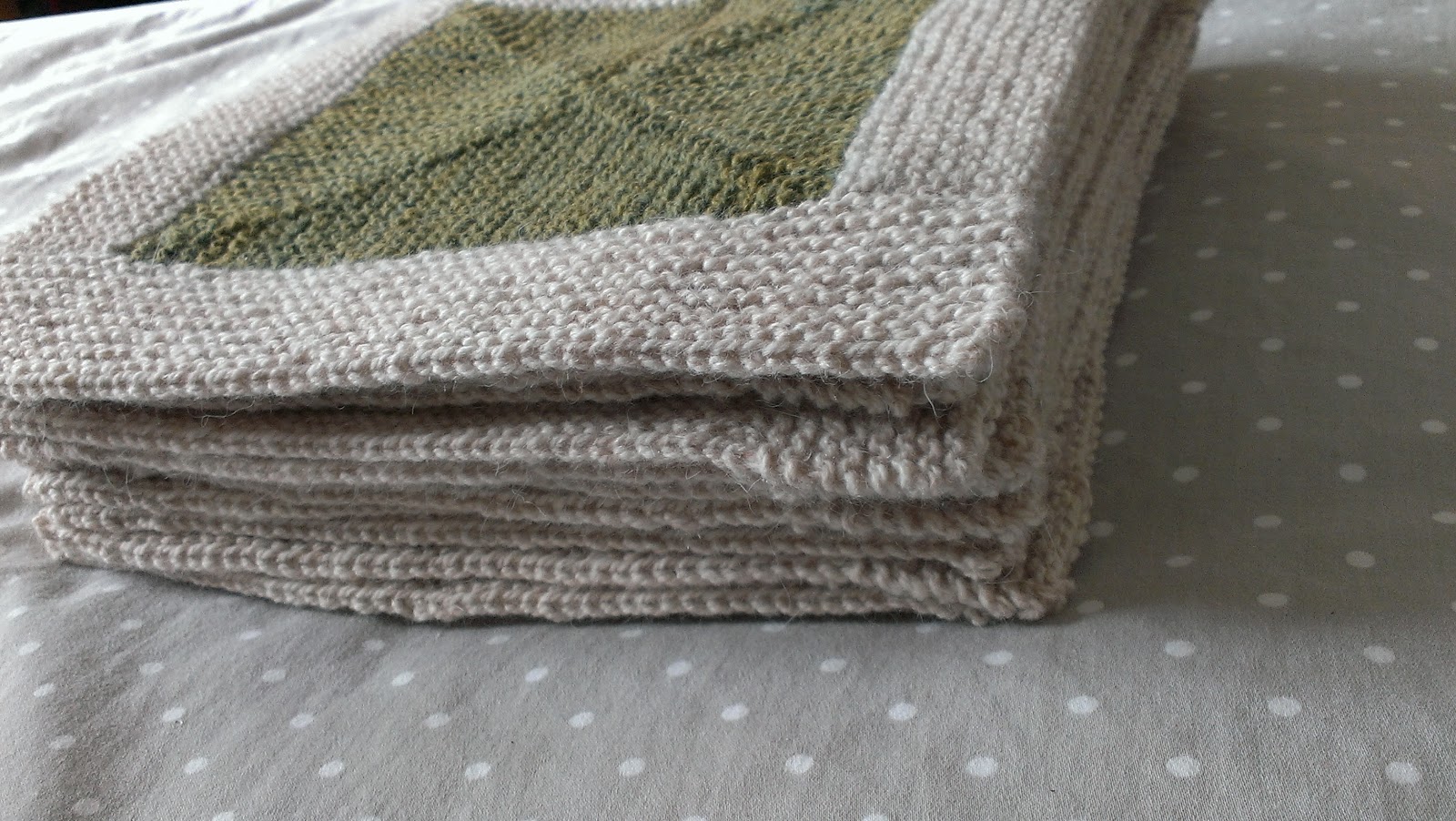 The pattern, based on mitered squares is fun and portable. There are some ends to weave in but I have been strict with myself and so each finished square is all done and dusted.

So far I have 12 completed squares (and another 5 waiting for their cream border) and I estimate that I need about 36. 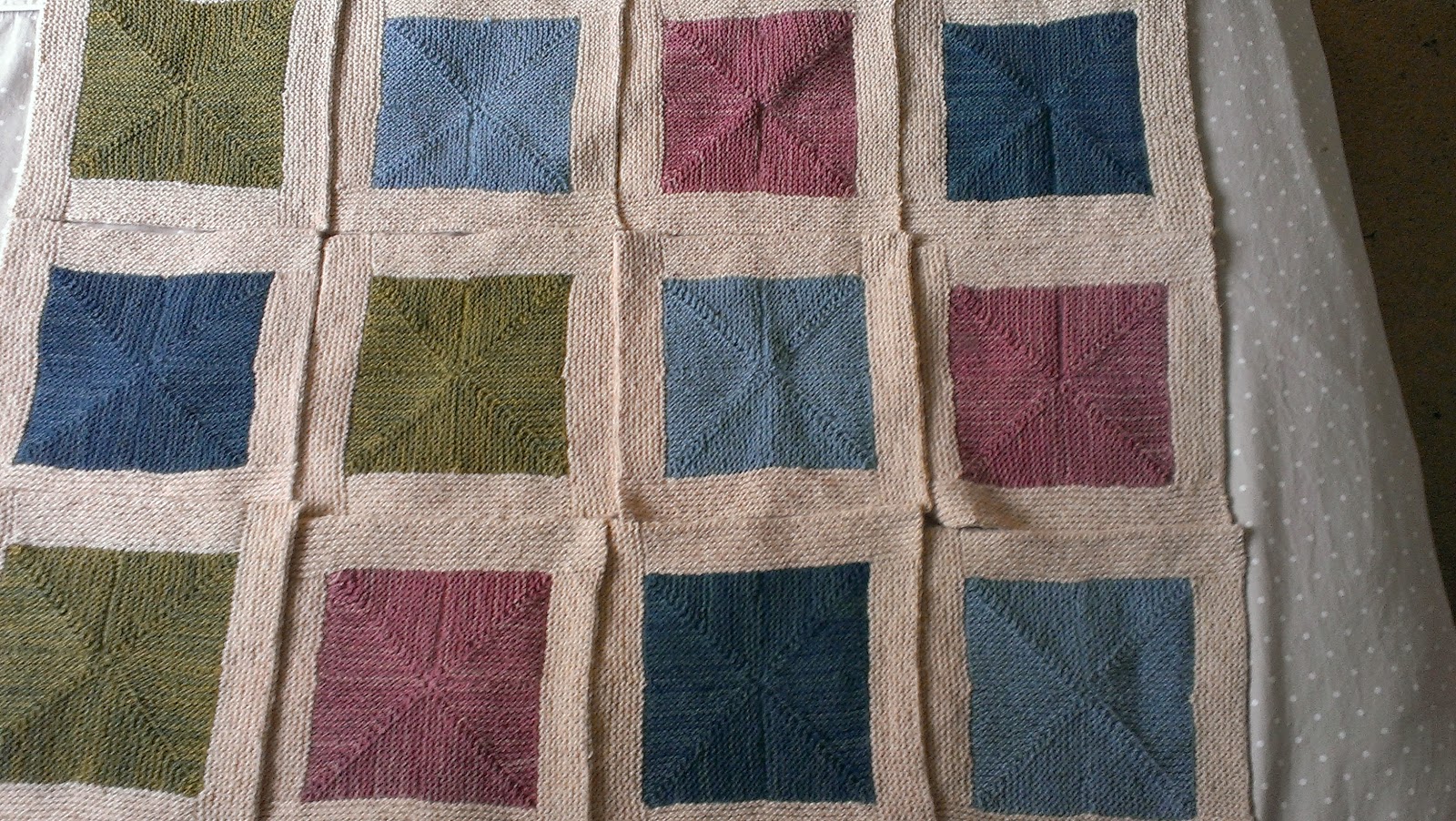 So, if it is such a lovely project and such a delight to work on why on earth does my Ravelry page insist that I started it nearly a year ago - May 2013 to be precise. A mistake surely?

But no, it doesn't lie. The sad fact is that I am too easily distracted by other projects. Too easily lured away by the the new and shiny.

So this post is away of me 'outing' my project and stating loudly and clearly...by the time it is cosy blanket weather again I WILL have a finished blanket.... probably.

Posted by Louise Tilbrook at 11:34 No comments:

Apart from new shoes, is there anything that makes you happier on a lovely spring day than new socks. 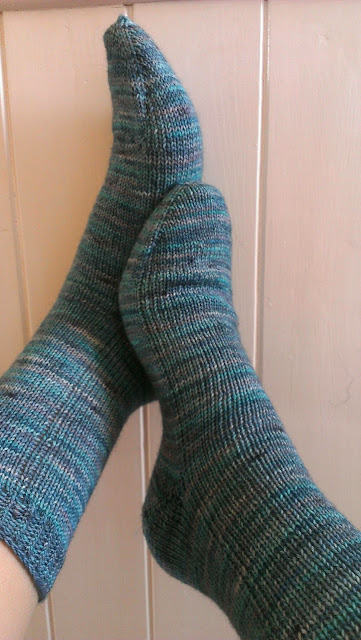 I'm a busy working mum with two children, a lovely husband and a slightly daft cat living and knitting in rural Essex.

I love to design socks - particularly toe-up and I love interesting textures and cables. The majority of my patterns are unisex - ideal for the larger footed person in your life and wherever possible I try to provide my patterns in both toe-up and cuff down formats. That way, you can pick the format you are most comfortable with and have a relaxing and fun sock knitting experience.

Me on Ravelry - come over and say hi

Promote Your Page Too